One of his friends inspired him to get clean. With the support of his key worker, Steven started off attending Street Soccer drop in sessions.

Expelled from school, using drugs and then homeless by the time he was only 16 years old, Steven spent the following 17 years living a life of chaos, isolation and misery. At 37 years old, Steven found himself in Jericho House, a residential rehabilitation centre in Greenock. He decided to tackle his addiction issues after a friend of his, who had come through similar experiences, recommended he visits. My mother and father had both recently passed away and I was debilitated by the pain of my everyday life.

When my friend spoke of their journey, getting clean and seeing how they were looking now I knew this was my chance. With the support of his key worker, Steven started off attending Street Soccer drop in sessions in Greenock. This is where his Street Soccer Scotland journey began. He credits these sessions, along with working closely with Street Soccer coaches as to what helped bring his confidence back.

My journey with Street Soccer Scotland to date has been amazing. After leaving Jericho house I got involved with the personal development course (Football Works) which Street Soccer Scotland offers, then I was invited to take part in the trials for the Homeless World Cup. Even though I had built up my confidence so much, at every trial it almost seemed like a dream too far, too big and too out of reach for me to make the team.

But week in week out I kept getting called back, going from 16 boys, down to 12 down to the final 8. At our last training session I was asked to join Ally, the Homeless World Cup manager on the side-lines. We always have a laugh but this time he looked quite serious, this is when he asked me to captain my country. My initial reaction was “Why me?” I was shell shocked!

“Being the captain brings a responsibility which I’m well aware of. But I feel I can do my team justice. If my mother was alive today she would be so proud of me.”

Steven believes Street Soccer Scotland has been one of the major driving forces of change in his life. “I love volunteering at the youth sessions, and being able to give a little back to the community in Greenock is a privilege.

Street Soccer Scotland has given me the belief that I can overcome any hurdles in life, take on challenges and try new things. However, the most important thing is that I now feel part of the community. And that’s the best feeling in life.

“Looking back to when I met my friend in the street who told me there and then, I was going to kill myself and now looking at today, captaining my country, being surrounded by people who believe it me, well I just don’t have the words.” 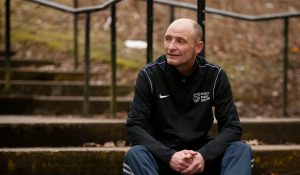 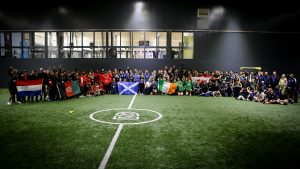